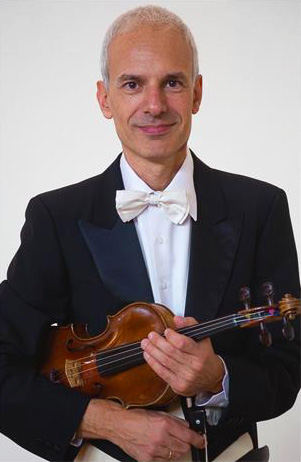 Started to study the violin with his mother Montserrat Cervera and he obtained his diploma under Mila Costisella at the Conservatory of S. Cecilia in Rome in 1988, with full marks and a note of distinction. He then specialised in violin with Pavel Vernikov, Zinaida Gilels and Eugenia Chugajeva in Portogruaro and in Wien, as part of a quartet with Piero Farulli, Raphael Hillier and Sadao Harada. Ever since he has been committed to an intense concert activity, that brought him to playing for important Institutions such as S. Cecilia Academy and IUC in Rome, the Philharmonic Hall of St. Petersburg, Milanomusica, La Fenice Theatre, S. Carlo Theatre and Scarlatti Association Scarlatti in Naples, and to chamber cooperation activities with renowned musicians such as Myung-Wung Chung, Alexander Lonquich, Michele Campanella, David Geringas, Mario Brunello, Boris Petruschansky, Antony Pay and Veronica Hagen. Acting as concertmaster of S. Cecilia National Academy Orchestra from 1996 to 2014, Marco has played with eminent conductors (Chung, Maazel, Pretre, Sawallisch, Temirkanov, Tate, Dutoit, Fruhbeck de Burgos, Pappano and Masur), has performed numerous tours in Europe, Japan, Korea and China, has interpreted the most famous "solos" by Strauss, Bach, Beethoven, Tschaikowsky and Rimsky-Korsakov and has recorded for Deutsche Gramophone, Musicom and EMI. With the same role he has cooperated with the Scala Orchestra in Milan, the Toscanini Symphonica, the Chamber Orchestra in Lausanne and the Symphonic Orchestra in Rome. On Dmitri Sitkovetsky's invitation, he has cooperated as concertmaster with the New European Strings, a selected group gathering some of the best first chairs in Europe. A fervent chamber musician, in 1995 he founded the Rome Quartet, which immediately won a prize at the XV International Competition in Trapani; he performs intense concert activity in Italy, Spain, Holland, Norway, Turkey, Algeria, Egypt, the Far East and above all in Germany, where he has been a regular guest since 1999, and where last February the Rome Quartet celebrated its 15 years of activity with a most appreciated recital at the Philharmonic Hall in Berlin. Particularly appreciated by both the Italian and German critics is the CD recorded by Bottega Discantica, with the quintets for clarinets and strings by Mozart and Brahms; the Reger and Marteau's quintets have been most recently recorded (Naxos), as well as the complete piece for quartets by Verdi and Puccini, the quartets op. 13 and op. 81 by Mendelssohn (Bottega Discantica). He was host in various Festivals: Spoleto, Orlando (Holland), Neuschwanstein (Germany). Marco Fiorini has played with the Prometeo Quartet in England, Switzerland, Germany, Spain and Armenia, as well as at the Festivals of Ravenna and Ravello, in Italy. With the Raffaello Trio he has recently published a CD with music by Dvorak and Smetana (Bottega Discantica). He has also recorded music for RAI, Radio Nacional de Espana, Catalunya Radio, Ermitage, Frequenz and Musikstrasse, RadioSvizzeraItaliana, Bayerischer Rundfunk. Amongst his solo commitments it is worth noticing his presence at the Festival Casals in Spain and his recent interpretations of the Beethoven Concerto at the Parco della Musica in Rome, and of the Concerto Gregoriano by Respighi with the Symphony Orchestra of Rome. As a violin teacher at the State Conservatory in Italy, Marco Fiorini holds violin specialisation courses and master classes, chamber music and orchestra courses, also in the capacity of conductor, both in Italy and abroad (Spain, Singapore), and he is in charge of the instrument technique section of the specialised periodical "Archi Magazine" (Strings Magazine).