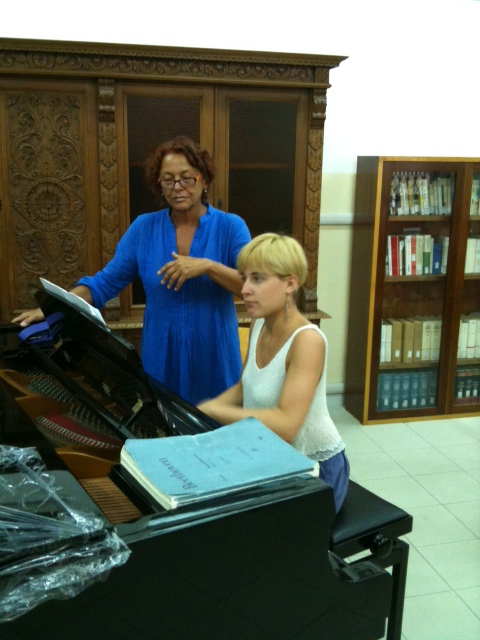 Drahomira Biligova studied piano and graduated with honors under the guidance of Pavla Pokojna at the Conservatory in Bratislava, where she was born, then completed his piano studies in Belgium with Jacques Genty, getting the Premier Prix to conservatoire of Mons, with Stefan Askenase to Bonn and to Rome with Fausto Zadra, Carlo Zecchi, Tito Aprea e Guido Agosti. She has attended masterclasses to Mozarteum in Salzburg, with Carlo Zecchi and Enrico Mainardi, and to the International Center of Musical Studies with Nikita Magaloff. She has won the First Prize at the Competition "F. Chopin" in Bruxelles (1969), since then he has held numerous concerts performing for prestigious concert venues, both solo and in chamber ensembles, in Cech Republic, Slovakia, France, Switzerland, Germany, Belgium, South Africa, Turkey and Italy. She has participated in international festivals including XXI Festival of Two Worlds in Spoleto. For Italian television she recorded a memorial concert, on the occasion of the 50th anniversary of the death of Leos Janacek. She recorded for RCA, she has to her credit engravings soundtracks of Nino Rota, Luis Bacalov, Armando Trovajoli e Carlo Crivelli. In December 2003 he participated in the International Exhibition of Contemporary Music "Corpi del Suono" performing "Plus Minus" a Stockhausen composition. She regularly gives master classes in Italy and abroad. It is part of the jury of numerous national and international competitions. Already professor of piano at the Conservatory "A. Casella" (L'Aquila).