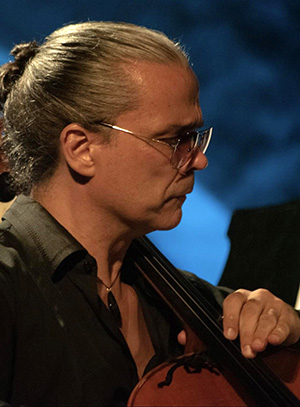 After starting as a child the approach to music, under the guidance of his father, he studied cello with teachers such as Rocco Filippini, Franco Maggio Ormezowsky, Misha Maisky. He graduated with full marks and honors and he studied at the Academies Santa Cecilia in Rome and Chigiana in Siena. Very young, he won the First Prize at the "L.Perosi" Competition in Biella and at the Rassegna Città di Vittorio Veneto. Later, winning other international competitions, he started a brilliant career as First Cello in prestigious Italian orchestras, playing as a stable and in collaboration with Teatro Carlo Felice in Genoa, Teatro Regio in Turin, Teatro la Fenice in Venice, Maggio Musicale in Florence, Teatro dell' Opera, Sinfonica di Torino of Rai, Sinfonica Nazionale of Rai. At the same time, he has developed a remarkable concert activity at important institutions in Europe, U.S.A., South America, former Soviet Union, North Africa, Japan, Korea, China. Dedicated to the most varied styles, he has interpreted from the music of the most traditional authors to those of today, often made of experimentation and contamination of various kinds. He himself is the author of original compositions. I note the association with the pianist Gilda Buttà, with whom he performs in the most boundless repertoire, which hosts composers of all cultures. He has collaborated assiduously for decades, as a soloist, with Ennio Morricone, with whom he has recorded for the greatest film productions and performed concerts all over the world. The same composer has dedicated "Monodia per violoncello solo" to him. Also as a soloist, he has been active with other musicians, with whom he has performed hundreds of soundtracks. Among them, Luis Bacalov, Paolo Buonvino, Pino Donaggio, Franco Piersanti, Nicola Piovani, Armando Trovajoli. Some films, in which he has performed as a soloist, are: "Il Fantasma dell' Opera", "Il Papa Buono", "Canone Inverso", "Perlasca", "Vatel", "La Sconosciuta", "La Migliore Offerta", "Il Cielo Cade", "Les Enfants du Siècle", "Almost America", "Preferisco il rumore del mare", "La parola amore esiste", "Il Commissario Montalbano", "Il Caimano", "Io e te", "The Prince's Manuscript", "Aldo Moro - The President", "Padre Pio", "The Young Casanova", "The Last Kiss", "Napoleon and I", "Remember Me", "Five Moons Square", "Calm Chaos", "Armed Cement", "Banana", "Fathers and Daughters", "The Doctors", "The Tale of Tales", "The Young Pope", "Sons". ... and many others. He has many participations in the world of pop music, with singers like Luca Barbarossa, Carmen Consoli, Elisa, Jovanotti, Patti Pravo, Renato Zero, Mina. He recorded for Sony, Decca, Warner, Meg Italy, Cam, Image Music, Heristal, U07, Almendra Music, Limen. Among the CD titles published are "Two Skies", "CLATAJA", "Composers" (in three volumes), "Absolutely Ennio Morricone", "Playing George Gershwin", "4 Italian Oscars", "Requiem for a solo cello", "The obvious romantic", "2XTrio", "XIXPopDanceXX". He composes soundtracks, stage music, songs in various styles. Some examples are "Andando via", "Cenere", "Trilogia anni '20", "The Flow". He teaches Cello at the State Conservatory of Music "A.Casella" in L'Aquila.